Yanovska, a former concentration camp in Lviv, was among the locations of horror during the German occupation of Eastern Europe. Nevertheless, this place is largely unknown. What would be the benefit if we knew more about it? And what is needed to happen, so we can learn something from Yanovska? 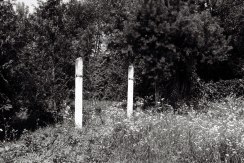 Site of former Yanovska concentration camp – gate to “the sands” 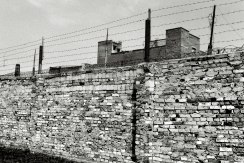 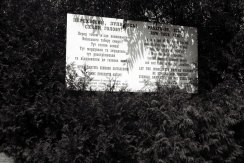 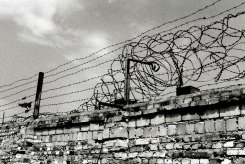 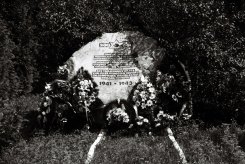 The former concentration camp of Yanovska (Yanivskiy in Ukrainian) is located in the west of Lviv and is easy to find. You just have to follow Horodots’ka Street – that begins next to the opera house – and then turn right into Shevchenko Street. You pass a large cemetery where there is also a Jewish section. Not a single grave stone from pre-war time is left. One of the slave works of the inmates of the Yanovska camp was the destruction of the old cemetery.

Nothing is left from the former concentration camp. The site was built over after the war with a Soviet prisoners camp. Today it is an Ukrainian state prison. What you see are brick walls, barbed wire, a large metal gate, a guard tower. In August 2012, I stand helpless with my friends Tanja and Karolina in front of this bleak terrain.

What happened in Yanovska? How many people have been murdered here? Who were the victims and who the perpetrators? The prisoners were mainly Jews, but also Poles and Soviet prisoners of war who suffered here from 1941 to 1943. Behind the camp lies a valley, called “the sands” (Piaski). There the executions by the SS took place.

A Soviet investigating committee in 1944 comes to this conclusion:

The earth at Piaski proved to be saturated to a considerable depth with corpse fluid and fats, together with the smell of decay and burning.

The nature of the ashes discovered, consisting of small pieces of bone, and the brittleness of the larger bone fragments, testify that the burning of the bodies was carried out at a high temperature. The ashes remaining after the bodies were burnt were buried in various places on the territory of the camp at a depth of three to six feet; in all, 59 such sites were discovered. Moreover, ashes and bones were found on the surface of the soil over nearly all of the camp territory examined by the Commission. Considering that the total area of burials and scattering of ashes and bones occupied nearly two square kilometres, the commission of experts considered that over 200,000 people were exterminated in Yanovska.

Somewhere there should be a memorial, but there is nobody to see we could ask. Karolina eventually goes closer to the watchtower and asks the guard if he knew anything. A monument? No, there is none. The usual story. We follow the road further and find the memorial a few minutes later.

Since the collapse of the Soviet Union and the independence of Ukraine, it is possible to commemorate the Jewish victims. Private initiatives for memorials are no longer disabled, but commemoration is so far not understood as a state duty. The memorial in Yanovska is such a private initiative. It goes back to Alexander Schwarz, one of the few survivors of the camp.

A place of remembrance is important for the survivors and all who lost family members. Where there is no grave, it needs a memorial to mourn the friends and relatives who perished. It is also a late act of acknowledgment.

Behind the memorial is an iron gate. A sign at the entrance announces that this is a public park. This park is “the sands”. We see a neglected area, a pond with drifting waste. Here, countless people were killed, burned and their ashes thrown into the wind. From here the ashes were spread over two square kilometers. On the edge of the pond, we see the remains of a fire. Someone has warmed up or had a barbecue. In the grass lie empty vodka bottles. It’s August and hot. But this place is so cold that we do not want to stay. It takes some time before we can talk again.

The city council of Lviv and the German Society for International Cooperation have launched a competition to redesign the site in 2010. The winning designs fit to the standards of  European culture of remembrance. Architectural quality, but cold and sterile. Something else would be more important.

In January 2013, I’m back in Lviv. In the local news I watch accidentally a report on teaching the Holocaust in Lviv’s schools. In case the genocide on European Jews should be the subject of the school curriculum in Ukraine, it would be a big improvement. What discourages me is this: The report  is illustrated by scenes from the archives that we all know. The ovens of Birkenau, corpses in Bergen-Belsen, the child in the Warsaw ghetto who lifts up his hands in front of his murderers. Pictures we all have seen a thousand times – but no pictures from Lviv. There are young Ukrainians in the news who tell, how interesting all of this is. They sound as convincing as their German peers do. They say what is expected by them. How to understand and commemorate, when history is completely disconnected with one’s life?

Maybe these young people would understand the holocaust differently if someone would tell them that it took place not only in distant Poland or Germany, but also in their own city. That there was a camp in their city, were people were killed in the tens of thousands. That in their city, thousands of people were beaten to death in public.

What is needed in Yanovska is not only a place of remembrance, but also a place of learning.

Former concentration camps as places of remembrance and learning – that sounds banal. As for Ukraine, it is anything but that. The country is covered with mass graves – most of them are not marked or have a memorial. The average knowledge of young Ukrainians about the Holocaust is low. This will foreseeable change in the next years. Young Ukrainians will ask questions, such as young Germans or French asked questions to the generation of their parents and grandparents. It has already begun. A memorial in Yanovska – including a place to learn and study – could help that these questions can not be easily dismissed.

By no means only locals can learn something in Yanovska, every visitor can. As more time passes, as more specific aspects of the Holocaust dominate in collective memory. Many people today think of Auschwitz and the act of industrial killing when they think of the holocaust. During the German occupation 1.5 million Jews were killed on the territory of Ukraine – very few of them in gas chambers. The vast majority was killed by “handwork”, by shooting. The perpetrators looked them in the eyes while they pulled the trigger. Also this we can learn in “the sands” of Yanovska.

One thought on “Lessons from Yanovska”