During my visit in October 2012, Zhovkva turns out to be an extraordinary beautiful place. As the nearby Lviv (Lwow, Lemberg), the town’s streets tell about the multiethnic past of Galicia – in a smaller scale than the imposing Lviv. The town has a touristic future. Jewish, Ukrainian and Polish heritage would be part of it. Including one of the most beautiful synagogues in Galicia. 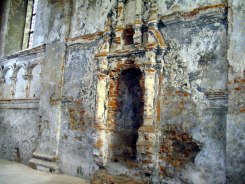 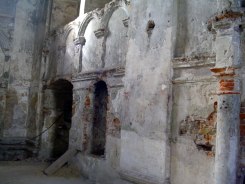 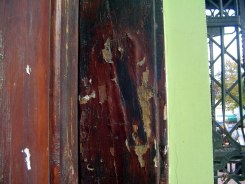 Zhovkva is located 25 kilometers north of Lviv and is easy to reach by one of the numerous “marshrutkas”. The town has much to offer: a large market square with beautiful arcades, a huge castle, a picturesque city wall, a great Ukrainian wooden church – and one of the most beautiful synagogues in Galicia.

I do not have to search for the synagogue, it is situated close to the bus station where I arrive. A magnificent Renaissance building from the late 17th Century, a typical Galician fortified synagogue. Unfortunately, a construction fence is blocking the entrance. I walk around the building a few times, take pictures, watch a busy farmers market and then make my way to the center.

In 2000 the in 1687 built synagogue of Zhovkva was included in the list of the 100 most endangered monuments of World Monuments Fund. Since then, some money was spent, so the roof could be replaced. The most important step, in order to stop the progressive deterioration.

On the way from the synagogue to the market place, I notice the trace of a mezuzah on a door frame. At the market, I see even more of these traces. On the futile search for a cafe I watch the arrival of a coach in front of the castle. The castle is so open. I decide to find out more. In the entrance area, is a ticket office including a souvenir shop. I look around a bit, finally see a large poster with a picture of Zhovkva’s synagogue. I wonder if the building is open for the public. Of course, the lady behind the counter says. It just needs some patience. They would bring the group of Swiss visitors to the synagogue soon. I follow unobtrusively.

The Swiss press through the open fence and on to the synagogue. I realize how much they are a aliens here and how much I am. In the end I’m alone with the official tour guide in the synagogue. Whether she would have a few minutes time, I ask, I would like to take pictures. I am grateful she says yes.

It is not easy to understand the space and bring it into a picture – the tall columns, the piles of building materials. Finaly, my eyes stuck on the Aron Hakodesh, the Torah shrine. It is empty and looted. Only the bare walls remained. In 1941 the German occupants of Zhovkva blew up the synagogue.

On the way back to the bus station I pass the farmers market again. Gorgeous mushrooms are offered there by old ladies. I’d like to buy some, but I have no way to prepare them and do not know anyone in Lviv to whom I could bring them as a gift. Where is the market today, once was the Jewish cemetery. No trace of it remained.

I’m on my way back to Lviv. During the bus drive and the way from the bus station to the hotel, I think about Zhovkva. The city has without doubt a future in tourism, today’s group will not be the last one. What will future visitors learn about the history of Galicia here? The question of the Ukrainian tour guide in Zhovkva is going through my mind: “Are you exclusively interested in Jewish history?” I did not like the question. But it gives me to think. Zhovkva tells a Jewish, a Ukrainian, a Polish history. There is a narrative from this three nations, depending on their fate. Sometimes these voices sound like a choir, sometimes like a cacophony. Visitors can learn about diversity in Zhovkva.

6 thoughts on “In Zhovkva you can learn about Diversity”