Next to the village of Lysynychi – now a suburb of Lviv (Lwow, Lemberg) – tens of thousands of people were murdered by the SS and their helpers. No one knows how many. The numbers vary between 50,000 and 200,000. The victims were mainly Jews, but also members of the Polish resistance, Russian prisoners of war and thousands of Italian soldiers who were massacred by the Germans after the capitulation of Italy. Does something commemorate these crimes and their victims in the forest of Lysynychi? Today I was there.

Lysynychi – view down to the former camp 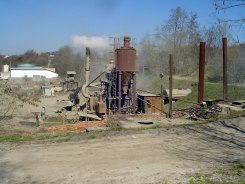 Immediately after the capture of Lviv by the Wehrmacht, the SS established a death camp next to Lysynychi. During six months, tens of thousands of people were killed, mainly Jews from Lviv and other towns in Galicia. In late 1943 new mass graves were created – this time for Italian soldiers.

To Leon W. Wells we owe not only an accurate description of the events in Lviv and the concentration camp at Janowska Road (also known as Yanovska, Janow, Yanov or Yaniv) during the German occupation. He is also one of the few survivors who wrote about the crimes in the forest of Lysynychi. In his autobiography, he left a detailed description of the temporary camp in September 1943. Wells was then part of the “Sonderkommando 1005”, which was responsible for the removal of traces of German crimes. “Action 1005” was the code name of the SS for the opening of mass graves, cremation of corpses and dispersal of all traces of mass murder. The Soviet commission for the investigation of German war crimes located 42 ash pits in Lysynychi forest and spreading of human ashes over a huge area.

From the autobiography of Leon W. Wells:

A highway leads to Glinanskiej Road, straight through the Krzywicki woods. At the entrance to the woods a guardhouse and ramp have been errected. A private villa in the woods has been commandeered, and it is now the Schupos’ (German police unit) and mess hall.

From the villa mess hall one can see our tents. They really do look like a circus from a distance. The truck stops, and we are ordered to walk uphill; we go about two hundred and fifty yard to the place where our tents stand, enclosed by two rows of barbed-wire fence, one around the other at a distance of about two feet. The two fences have barbed wire woven between them. The height of the fence is about ten feet. They encircle a square. Each side of the square is about seventy-five feet long.

In one corner of our fenced-in area is a field kitchen. Close to this are benches, and on this are basins for washing. In the other corner of the area is an open toilet.

Each of the two tents is about twenty-nine feet long by twenty-five feet wide. One tent holds eighty inmates. The rest of the men will live in the other; they are our elite, the foreman, the group leader, the men who clean the camp and keep it in order, the three leathercraftsmen, and some members of the Ash Brigade. I am in this group, too. We are the one who don’t smell, who don’t have direct contact with the bodies. One-third of this second tent is separated by a wall. Forming a shop on one side. On both sides of the wall are double-decker beds. In the middle of the tent is a long table, and on both sides are benches. We have an electric light here. There are searchlights on all four corners of the barbed-wire fence, lighting up the whole area all night long.

About one hundred and fifty yards away from one side of the camp is a hill of white sand several hundred feet hight. This very high hill hides our factory, which changes corpses into ashes. On top of this mountain are two bunkers. To each of this bunkers four Schupos have been assigned; two sleep, one is at the telephone, while the fourth marches outside, back and forth. In addition to the eight Schupos on the hill, there are two Schupos who patrol the area all night long.

On Thursday, September 9, 1943, we leave for our first day of work. At this new site. There are many graves here, one next to another, starting about one hundred feet from our camp. The corpses in these graves have been in the ground for more than a year. In some of the graves, beside the corpses, there are packages of clothing. We can tell from these packages that the graves contain the victims of December, 1941, action at the „Bridge of Death“.

Today I was in the forest of Lysynychi. With me were Petra and Achim, my companions on this trip, as well as Alex and Kostya, who examined the forest under severe winter conditions before.

Before this trip, I was restless. I had no idea of what to expect in the forest of Lysynychy or what I hope to find there. As we leave the “marshrutka” – the local mini-bus – we face a smoldering asphalt factory. We pass it, until we reach an area with large tanks. Here was the end of the railroad track, on which many of the victims came to the last place they should see in their lifetime.

We climb up a hill, here were the bunkers, of which Leon W. Wells reported. We do not find traces. We can look down into the valley where the camp was. What we see is just a forest. No remains of buildings. No memorial. Just a forest.

Where once was the camp, workers are busy to fell trees. We hear the noise of chainsaws. Then they take a break and we move on. Now it is quiet in the woods, we hear a cuckoo. It’s peaceful here. The sky is blue, the temperatures are springlike mildly. On the trees is first green. The ground is covered with small white flowers.

The forest ground is rutted by paths, trenches from the First or Second World War, circular holes and regular elevations. Kostya stops at such an elevation. “This could be mass graves,” he says. Kostya has served in the army. “The drains are certainly no trenches.”

In the forest of Lysynychi the plan of the murderers was successful. The traces of crime were erased. Nothing recalls those who were killed here by tens of thousands. Here’s just a forest. The graves are overgrown with small white flowers. It’s peaceful here.

11 thoughts on “Landscape after a Genocide”