April 24. Zigzag through Galicia: From Brody via Zolochiv, Pidhirzhi and Rohatyn to Berezhani. On the way are spectacular monuments – but also very sad places. 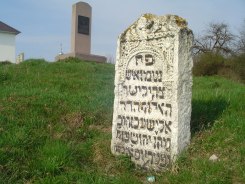 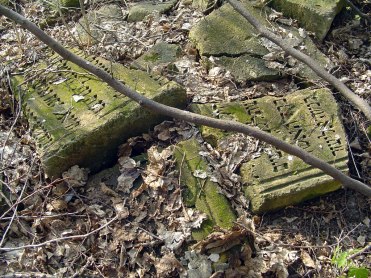 Rohatyn – new cemetery
In Brody we look briefly for the former school of Joseph Roth, almost exactly 100 years ago he has passed his Abitur (high school diploma). The spot is crowded by young people and children – some in school uniform, some without. A plaque – mounted by an Austrian Literature Society – commemorates the famous writer. Then we have to go. We drive west, then turn south towards Zolochiv.

A few kilometers after a crossroad a surprise is waiting for us. Just before the village of Pidhirzhi we see a huge Baroque church – as we look to the left there is an even more impressive palace. We park the car and inspect the spot: A Polish noble castle, where a part of the royal family Sobieski has lived, overlooking the vast fields of Galicia. The huge building has a solid foundation fortress, upon rises a kind of fairy-tale castle. However, a fairytale castle, which is in poor condition. As far as we can see it through the windows, the interiors are largely destroyed. The facade is crumbling. But one also sees that the renovation has begun. The roof has been replaced, parts of the facade also. We walk around the castle and look down in amazement to the Galician lowlands.

We continue south. Achim’s driving skills impress Petra and me today. Prior to the trip we were warned about these roads. They look like they were taken under fire by the Ukrainian army for weeks during the winter. Pothole after pothole – every one so deep that at too high a speed it can easily break an axle.

Finally we reach Zolochiv. The biggest attraction of the city is a fortress. In 1939 it was taken over by the NKVD, the Soviet secret service. As in 1941 the Wehrmacht approached, the Soviets shot their prisoners – mostly Ukrainian nationalists – and buried them in the courtyard of the castle. The discovery of this crime served as a pretext for a pogrom. Germans and Ukrainians forced Jews who were blamed for the death of Ukrainian nationalists to exhume the bodies. Then the Jews of Zolochiv were brutally murdered in their thousands and buried in the courtyard of the castle in a mass grave.

The castle is now a museum. Ukrainian Nationalists are honored there in detail. The assasination of the Jews is at least mentioned. But both events keep un-connected. A memorial to the murdered Jews of Zolochiv does not exist. The visitors, who walk over the mass grave today, know nothing.

We turn west and then south again – towards Rohatyn. There should be two Jewish cemeteries that interest us. In Rohatyn it’s time for a snack. When we finished our meal, I’m talking to two young men at the next table, ask them about the Jewish cemeteries and show them photos. One of them knows what to do with the images and identifies the places immediately. With the help of a third young man he draws a sketch for us. Now it’s easy to find this places.

Both cemeteries offer a picture of destruction. The old cemetery is idyllically situated opposite a beautiful wooden church on a hill. Only a few grave stones have been preserved. How crooked teeth they stick out of the ground. There is a Ohel for a high-personality and a monument. The new cemetery is outside in a development area. Again, there are only a few upright grave stones. Around a monument are a few dozen fragments – grave stones that during construction works came to light and were stored here. As we want to be on our way, a woman comes over who brought her granddaughter as a translator. She tells us how terrible she finds it that the neighbors throw their garbage over the fence to the graveyard. Plastic waste is all around. She wished the cemetery would be in a better state. What can we say?

We continue east to Berezhani. The road does not get better, rather worse. We need to search for a hotel. The hotels in our guide book are no longer, another hotel has closed. Finally, we are lucky to find a hotel in the far west of the town. We are glad to have a bed for the night.

2 thoughts on “From Brody to Berezhani”