Vadul-Raşcov (Vadul-Rashkov) in Bessarabia is one of the most impressive Jewish cemeteries I have ever seen. There are a few hundred, if not a few thousand gravestones, located on a hill sloping to the banks of river Dniester. This is borderland – in many aspects. 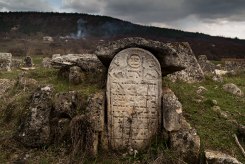 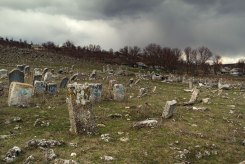 Due to an exhibition next year, I went through photos of my visits to Vadul-Raşcov in March and August – to my surprise I have better pictures than I thought. Here is a selection of them.

Vadul-Raşcov is located in the Moldovan borderland to Transnistria, an area which has declared itself independent from Moldova – an independence recognized only by Russia. As a visitor you feel in many ways like exploring an outer frontier. This is so very remote! What ends here, what begins on the other side of the river? There used to be a ferry to the opposing Raşcov – it has been shut down since a long time. Also in Raşcov there is a Jewish cemetery and an impressive synagogue. The Dniester winds between the places. A border line.

I liked the bright sunshine when I went to to Vadul-Raşcov in summer with friend and photographer Sylvia de Swaan. But I liked the place and the light even more when I was there in early spring with my friends Achim and Petra. The sky was covered with havy rain clouds, atmosphere and light were mysterious. In the unique ensemble of cemetery and landscape river Dniester looked like one of the underworld rivers of Greek antiquity. It could have been Styx or Acheron.

It was the Swiss historian and diplomat Simon Geissbühler, who made me aware of Vadul-Raşcov. Obviously, there is little information about the former Jewish population of the place. Simon writes:

“There is only scarce information about Jewish Vadul-Raşcov. Vadul-Raşcov was “a typical Bessarabian shtetl” with a majority Jewish population. According to some accounts, the first Jews settled in Vadul-Raşcov at the beginning of the 19th century. Before World War II, Vadul-Raşcov had one church and seven synagogues. In 1930, there were nearly 2,000 Jews living here. (…) Vadul-Raşcov seems to have been the location of a Hasidic court.”

Today there are no Jews in Vadul-Raşcov anymore. What happened to them when Romanian troops reconquered Bessarabia from the Soviet Union in 1941? Were they deported or shot at the spot? Or did they manage to escape – at least some of them? Opposite to other places in the region I saw no post-war burials at Vadul-Raşcov cemetery. Either there were no survivors or they had reasons not to return. Simon also knows nothing about it. “I was unable to find any definite information about Vadul-Raşcov during the Holocaust.”

The comprehensive JewishGen database also states: “There is no information on the fate of the Jews.”

Vadul-Raşcov, its Jewish cemetery and the fate of its Jewish community remain a mystery that the historian have to solve. In the meantime only the cemetery can tell about the tragedy that took place here.

Update: Ruth Ellen Gruber of Jewish Heritage Europe made me aware of a witness interview at the Yahad in Unum website about Vadul-Raşcov in summer 1941 when it was recaptured by the Romanian army:
http://yahadmap.org/#village/vadul-ra-cov-vad-rashkov-soldanesti-moldova.851

9 thoughts on “Vadul-Raşcov Jewish cemetery: Little is known, all is visible”