Our route lead us along the Romanian border today. We found Jewish heritage sites in Vynohradiv, Sasovo, Khust, Tiachiv, Teresva and Solotvyno – and beyond this the traces of literally collapsed industries and profitable smuggling activities. 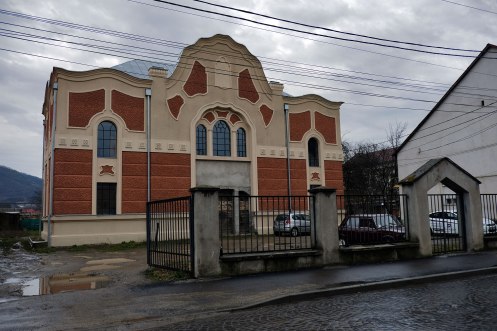 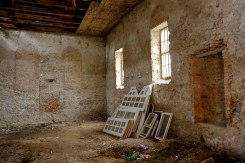 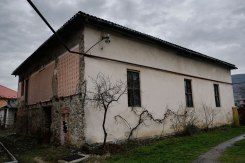 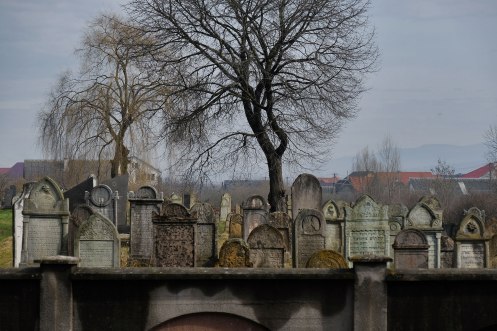 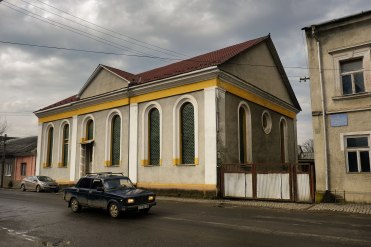 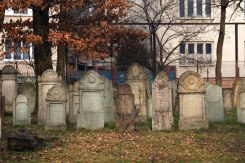 Vynohradiv synagogue was the first surprise of the day – a beautifully restored building. A nearby beit midrash is in poorer condition, but also the cemetery is well protected and maintained. It turns out as an characteristic of this trip through Transcarpathia that there are active Jewish communities in many places and therefore more protection and maintanance of heritage sites.

What Marla, Jay, Vasy and I particulary enjoyed, are the small Jewish cemeteries in villages. One of them is in the village of Sasovo, The cemetery is small and obviously needs a drainage, but the stone carvings are beautiful and the location in a rural residential area is picturesque. A comparable place we found in the village of Teresva.

Khust is the economic center of the region near the Romanian border that we passed through today. Also here we found a renovated synagogue – obviously used by an active community – and an huge cemetery. Nevertheless the town depressed us. Poverty is very visible and many places look run down.

Tiachiv brought back better mood. There is a former synagogue, now a gym, but the present owner is well aware of the history of the place and kindly welcomes visitors. Like other cemeteries in the region Tiachiv cemetery is well protected by a solid wall, but we managed to have a look inside from an earthen elevation.

Solotvyno is known as the capital of smugglers. Unfinished villas – for not saying palaces – are everwhere. One of the victims of this activity is the former synagogue. It has turned into a monstrosity of a residental building – until construction activity stopped. Beside the old Jewish cemetery there is also a small new one. We found it thanks to a hint by our friend Alex Denysenko and an old lady, who was so kind to show us the way. The surrounding is quite bizarre – the cemetery is situated next to collapsed salt mines, which left deep craters in the terraine.

Now we are already back in the Carpathians. We will return to some places in the flatlands tomorrow morning and than head back to Lviv.