Trochenbrod (Trachimbrod, Sofiyovka) was an all-Jewish town that was completely wiped out. Not a single stone has been preserved from a place with formerly 6,000 residents. Nevertheless Trochenbrod has a unique afterlife – the place became famous through Jonathan Safran Foer’s novel “Everything Is Illuminated” and the film adaptation by the same title. Like many others, I thought Trochenbrod was fiction. But Trochenbrod existed. 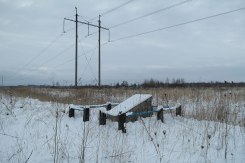 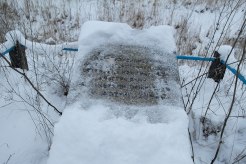 On the way to Trochenbrod

Together with Renata and Vasyl I have been to Trochenbrod today – Vasyl, the driver who despite all difficulties with roads and paths kept his sense of humor, and Renata, who has helped me already on other occasions.

My friend Alex had warned me before of the condition of the road to Lutsk and he was right. Soon after Lviv pothole is after pothole. Vasyl needed to slow down the car to 30 kilometers per hour and the 110 kilometers to Lutsk took us 3 hours. Shortly before Lutsk conditions improved, we now made rapid progress until we had to leave the main road. We passes through two very picturesque little villages – Yaromel and Domashiv – then we finaly had to leave the paved road. The path was barely visible in the snow, Vasyl bravely attempted to pass a bump, and then the car stuck in the mud.

It took us about an hour to get the car out and decided to walk the last 2 kilometer. The path went on through a snow-white winter forest. We saw traces from animals in the snow. Around us was complete silence. Then we were in Trochenbrod.

Two memorials commemorate the town that was once. One is from the Soviet era and speaks of “Soviet citizens of Jewish nationality” who were murdered here. The second seems to be more contemporary and marks the mass grave where most people of Trochenbrod were shot.

A dirt road that leads along a power line and a water channel is the last echo of Trochenbrod. It is the former main street of the town. Nothing is left, not even ruins. We walked along the road. It was getting colder. The sun began to sink. Not even birds could be heard. It was time to leave.

16 thoughts on “Into The Nothing”