The photo exhibition by Wojciech Wilczyk gave me a good pretext to visit Warsaw. Warsaw, the city that was completely destroyed. Warsaw, the city that resurrected. What gives people the strenght to build a new city upon ruins? My father was in Warsaw when the city went up in flames and was blown up block by block. He was a soldier of the German Wehrmacht, and his unit was in the city during the Warsaw Uprising. He never talked about the war, and I’ll never know what he did. How could he live with the destruction of Warsaw? And how can I? 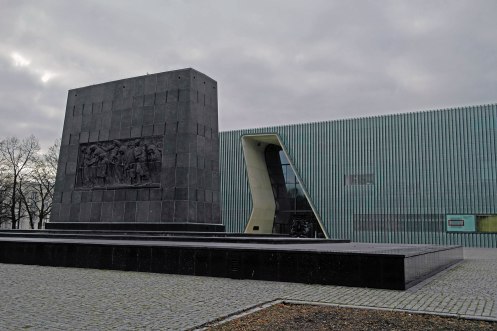 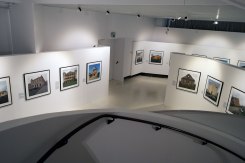 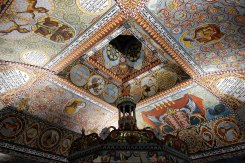 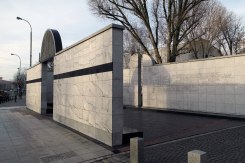 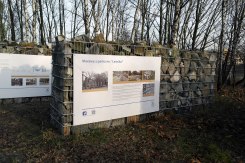 Warsaw – trace of a mezuzah

Warsaw – trace of a mezuzah 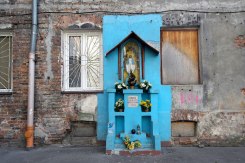 Warsaw – shop sign of a Jewish tailor in Praga 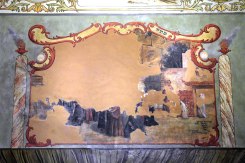 Warsaw – mural in a former prayer house, now a museum 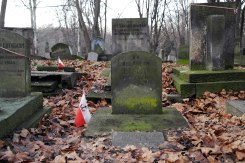 Wojciech Wilczyk has photographed 300 former synagogues in Poland in a large-scale photo series. It is an impressive body of work, and one of the reasons I like it is because it is so close to what I’m doing. Equally impressive is the place where the exhibition is shown: the POLIN, the new Jewish Museum of Warsaw. Warsaw needs such places where memory is preserved. It needs it because of old Warsaw almost nothing remained. The POLIN does an excellent job – as well as the many monuments, which can be found everywhere in the city.

Warsaw is a new city – sometimes a faceless city. My Hotel was located at the edge of the former ghetto – where the Nazis herded 300,000 of Warsaw’s Jews. 100,000 died of starvation and disease, the others were murdered in the gas chambers of Treblinka. The anonymous apartment blocks can not tell this story, but maybe the monuments. The monument to the uprising of the ghetto, the monument at the former “Umschlagplatz” (transit point), from where the trains departed to Treblinka. Trains with no return.

Warsaw is a place to meet friends for me. Friends, I know just from social networks. Important friends, friends with whom I can share history. Marla Raucher Osborn and her husband Jay. Marla works for the “Foundation for the Preservation of Jewish Heritage in Poland – FODŻ”. Krzysztof Bielawski, who works for the POLIN and the wonderful on-line portal Virtual Shtetl – a web site that has been an invaluable help during my travels.

Krzysztof took time to guide me through Warsaw. We arranged to meet at the Jewish cemetery in Brodno. The site has recently been fenced, but we found a way in. The cemetery of Brodno was devastated during the German occupation, but it were the Communist postwar authorities who destroyed it finaly. The grave stones were torn out and collated at a central point. Today this part of the cemetery is a sea of grave stones. Some of the stones were assigned as building material. They were used for pavilions in parks or as a mount for a Soviet Memorial.

Krzysztof guided me through Praga, a district on the eastern side of Vistula river, which was not destroyed as much during the war as the western part of the city. Praga always had the reputation of a district of poor people. Before the war, there were many Jews. The traces of war are still visible at the facades. Here are many old buildings – buildings which need help, as the people who live in them do too. Krzysztof showed me a former mikvah, a former Jewish orphanage and several traces of Jewish home blessings – mezuzah – at door frame. One Mezuzah is disfigured by an obscene drawing that someone has scratched into the door frame. One block further, we find a graffiti that in huge letters says “I miss you, Jew!”. Praga is as contradictory as life is.

It’s almost dark when I reached the second Jewish cemetery of Warsaw at Okopowa Street. It’s an impressive place that speaks of prosperity of the Jewish community and its heroes. People who were killed during the Ghetto uprising, others who took part in the Warsaw uprising, famous rabbis and entrepreneurs. Next to the cemetery – which bordered directly to the ghetto during the German occupation – there is a monument on a mass grave. The cemetery tells of greatness and destruction.

I have no answers to the questions raised at the beginning of this post. To one question I will anyway get no answer, because the one whom I could ask is long gone. I have only provisional answers. One is to travel and face history and truth. A second response are friendships and conversations, maybe the beginning of something new and better. The third answer is Warsaw itself. Warsaw is still there, it was rebuilt – in spite of everything. I’ve seen it.