Latvia’s capital Riga looks back on a rich Jewish heritage from the middle ages up to the present. Riga ghetto was the last destination for many Latvian Jews as well as for those who were deported from the Reich. Today there are remembrance sites as well as a functioning Jewish community. A long weekend gave me the opportunity to have a look on it. 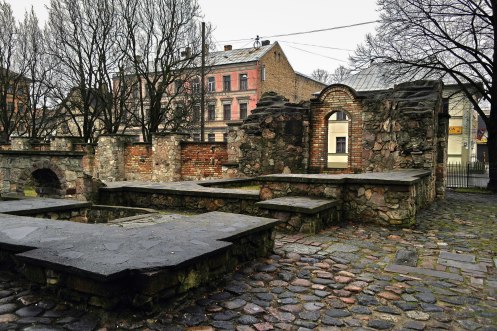 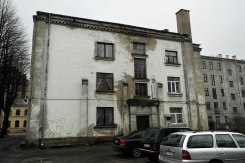 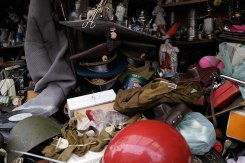 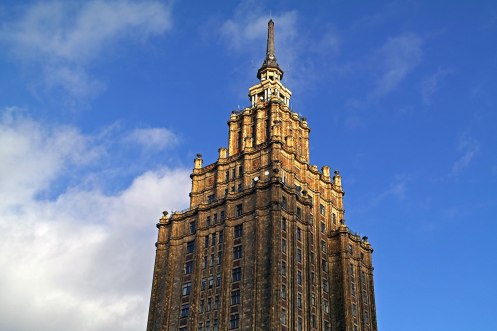 A plaque marks a building where Jews were hidden by Latvians

Detail from a building designed by Mikhail Eisenstein

At the banks of Daugava river

The historic center of Riga is located on the east bank of Daugava river. It consists of the medieval center, a wide ring of middle-class districts of the late 19th and early 20th centuries, and the Moscow suburbs in the south. The Moscow suburb was once the quarter of the poor Jews, later the Nazis set up the Riga ghetto there. To date, it is a neighborhood of the poor. The hotel where my friend Miriam and I stayed, is located in the Moscow suburbs. Within a short distance from the hotel some testimonies of Jewish life are still visible. Just a block away are the remains of the Choral Synagogue that was burned down in 1941 – with it several hundred people were burned alive. The ruins are now part of a memorial. Its central monument is an inclined concrete slab with the names of Holocaust victims. Since the collapse of the Soviet Union and the independence of Latvia, Jews can publicly commemorate their murdered relatives.

Diagonally across the square of the Holocaust memorial extends a flea market. Antique hunters may find treasures here, but in many cases Miriam and I were wondering what some objects may be good for. In front of the flea market wait those old people for customers who can not afford a booth. Their goods are single old shoes or some used screws and nails.

A crossroads further begins the former ghetto area. On the eve of WW2 about 40,000 Jews lived in the Latvian capital, which equaled 11 % of the population. Thousands more were deported from the Reich to Riga, including those from my hometown Cologne. Only a few survived the ghetto, forced labor, disease, hunger, and the ‘Aktionen’ of the SS. A synagogue is preserved within the territory of the former ghetto; a Beis Midrash (Jewish study house) and apartment tenants share the building today. The former ghetto is not on the route of tourists. It was therefore probably a wise decision to accommodate the Ghetto Museum in restored warehouses closer to the old town. A long board lists the deportations that departed from the Reich to Riga. Miriam and I found our hometown Cologne on the list; 1,011 people were deported from Cologne to Riga, only a few survived. “We are not sure about the number of survivors”, a museum guide explained, “the Germans took all documents with them and destroyed them later”. The Ghetto Museum is only a few years old, but was already awarded for its website.

In the middle-class districts in the east of Riga were the neighborhoods of wealthy and assimilated Jews. The former Jewish theater now hosts the Jewish community center and a small museum that documents the history of Jews in Latvia. A little further southeast is another former synagogue, which is now used as a school.

There are some places where the Holocaust is commemorated, but there is also a functioning Jewish community. Their gem is Peitavas Synagogue in the old town, which was extensively restored seven years ago. “That’s real Art Nouveau” said the old man proudly, who was guarding the building.

Art Nouveau is a keyword for many Riga visitors. The Art Nouveau district in the northeast of the city’s UNESCO World Heritage Site attracts countless tourists. The most famous Art Nouveau architect was Mikhail Eisenstein, father of the famous Soviet film director Sergei Eisenstein. He designed about 50 buildings in Riga. Also Mikhail Eisenstein is part of Riga’s Jewish history.

3 thoughts on “Three days in Riga”