On 18 February ‘A Story of Destruction and Rescue’, an exhibition documenting the Holocaust in the eastern Galician towns of  Drohobych and Boryslav was opened in Cologne. The exhibition was created by an international team from Poland, Israel, Ukraine and Germany. It was already on display in several locations in Poland and Ukraine and will be shown in more places in Israel and Ukraine this summer. The Cologne exhibition will remain open to the public until 31 March. 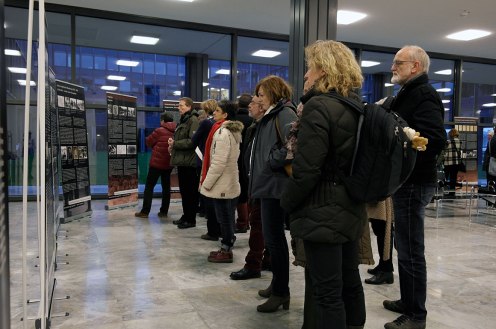 Visitors at the exhibition opening 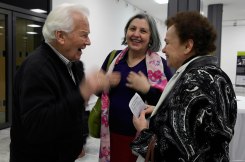 Activists of Action Reconciliation Service for Peace, among them Georg Goosmann 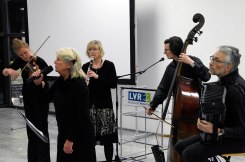 Jürgen Wilhelm – head of the Regional Assembly of the Rhineland – speaking

The introduction and credit displays of the exhibition describe quite well the purpose and history of the project:

„Galicia as an cultural landscape in the east of Central Europe is divided between Poland and Ukraine today. Jews constituted an important part of the multi-ethnic society in the region since the Middle Ages. The towns of Drohobych and Boryslav were a center of the Galician oil mining belt and therefore important for the war effort of the German occupiers during World War II. The Jewish population was taken to forced labor, and was finally exterminated.

This exhibition documents the Holocaust in these Galician towns. It follows the fate of Holocaust survivor Prof. Józef Lipman and his family. It pays tribute to the courage of rescuers, in particular to Berthold and Else Beitz.

Each year members of the 40 + generation work in ASF (Action Reconciliation Service for Peace) summer camps for one to two weeks, often renovating Jewish cemeteries. In 2010 Prof. Lipman told such a group working on a Jewish cemetery in Wrocław about his lost childhood in the Holocaust. Two years later, members of the group retraced his roots in Borysław (Ukraine). They accompanied Prof. Lipman in the following year when he visited Borysław for the first time since 1946. After the mayor of Borysław authorized placement of a memorial plaque commemorating the rescuers, Berthold and Else Beitz, and an exhibition in the municipal museum, the ASF group contacted DBO (Drohobycz Borysław and Vicinity Organisation) and FBK (Fundacja Bente Kahan). At the end of 2014 the cooperation in the multinational project, „Remembering together – across borders“ was established.

Some months of strenuous work followed: collecting material and photos, textual descriptions in German and English, reviews by historians, editing cycles, translation to Polish, graphic design, and rework again. In May 2015 the first exhibition was opened with a vernissage in the White Stork Synagogue in Wrocław. Thousand visitors viewed the Polish exhibition in the Museums’ Night alone. In July the memorial plaque commemorating Beitz was unveiled in Borysław and the first Ukrainian exhibition was presented in the Municipal museum. Several exhibitions in Poland followed, and a lot more in Germany, Israel, Poland and Ukraine will take place.“

It was my pleasure to accept the invitation by my friend Klaus Hasbron-Blume, to contribute to the design of the exhibition. It was a unique experience to join this international team.