I have been to Drohobych before. But Tanya Firman, who guided my friends Marla, Jay and me, made the visit special today. The Galician town had its golden age when oil was found there in the 19th and early 20th century. Much is still visible from that time – but also from the tragic end of Drohobych’s Jews. 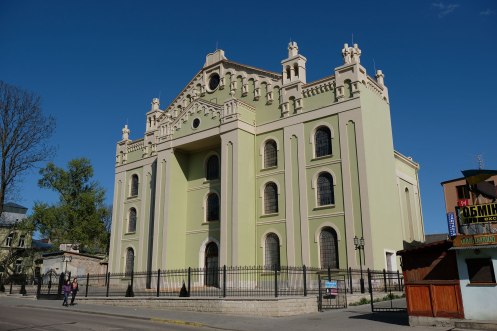 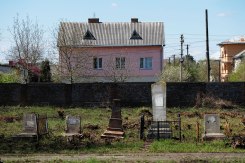 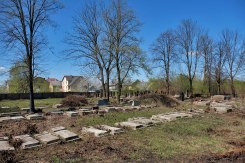 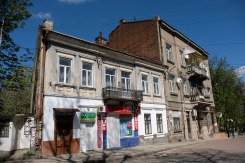 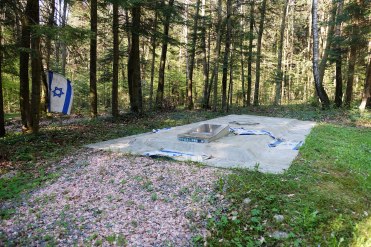 Tanya already expected us when we arrived at the bus station. Our first stop was at the Great Synagogue, the biggest in Galicia. The building has recently been renovated and now again reflects the wealth of Drohobych’s and Boryslav’s oil age. But the oil, that made Austria-Hungary the third largest oil exporter worldwide, made not everybody rich. Next to the synagogue was a quarter of bitterly poor Jews. Bruno Schulz, a famous writer and visual artist from Drohobych, encouraged his students to draw sketches there, feeling this world would soon vanish.

Drohobych had two Jewish cemeteries. One was destroyed after the war by the Soviets and built over with apartment blocks. The other one still exists and was recently cleaned. Bruno Schulz is believed to be buried in a mass grave there.

Drohobych’s old splendor is still visible. We saw a lot of impressive villas – but also a number of social institutions. Tanya showed us the former Jewish orphanage, an imposing building from the Austro-Hungarian age. Children who lost their parents in the oil fields due to missing work safety were accommodated there. A star of Davis is still visible at the facade.

The oil that made Drohobych rich, but is also connected to the end of its Jewish population during the German occupation. When the Germans understood they would never reach the oil fields of Baku, they focused on the Galician oil. Jewish slave workers had to exploit the oil fields for the German occupants – which did not save them from extermination.

Tanya brought us to the forest of Bronytsya, a small village north of Drohobych. Thousands of Jews have been shot there. About ten mass graves have been located. Huge concrete slabs mark and protect the mass graves. We walked around and for a long moment nobody was able to say a word. Only the birds were singing.

The Holocaust in Boryslav and Drohobych was subject of a joined initiative of organisations from Germany, Poland, Israel and Ukraine. More information is here: http://remembertogetheracrossborders.eu/
Information about Jewish Drohobych and Boryslav is on the website of Drohobycz Boryslaw and Vicinity Organization.