Our journey through Galicia, Bukovina and Bessarabia goes on. During the last two days we went further south. Between the regional metropolises of Lviv and Chernivtsi we visited the towns and villages of Busk, Olesko, Brody, Skalat, Hrymailiv, Sataniv, Husiatyn, Chabarivka, Zalishchyky and Yuzhynets. What a trip!

Busk – Jewish cemetery – there is always somebody to tell the story 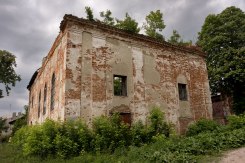 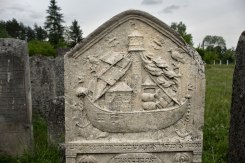 Hrymailiv – interior of the synagogue 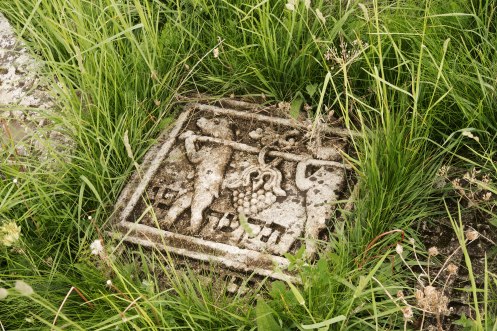 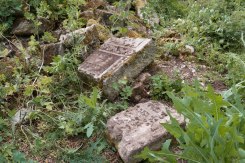 Chabarivka – tombstone fragments from the destroyed Jewish cemetery of Husiatyn 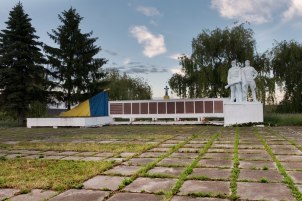 At most of the places, I had already been before. And as I don’t like to repeat myself, please make use of the tags below to learn more about these places. But I had never been to Skalat and Yuzhynets before and these places were therefore my personal highlights.

Skalat is mainly known for its magnificant castle. In the shadow of this imposing medieval structure the ruin of the former local synagogue is situated – a building from the inter-war periode, heavily sovietized, and now crumbling away.

The visit to Yuzhynets our group owes fellow traveler Heike. In this tiny village famous psychoanalyst Wilhelm Reich spent his youth. The tragic death of his parents during that time, gave the kick to his vision of liberation of human sexuality, the foundation of Reich’s own direction and school of psychoanalysis and his contribution to our understanding of the human soul.

It was moving when the chorus of the local culture club welcomed us with beautiful Ukrainian folk songs when we asked for the location of the former property of the Reich family – and it was not less amazing when our group answered with a Germansong. Not much is left of what was once Wilhelm Reichs home. The original building was destroyed and a Soviet building was errected on the spot. But somehow we catched the spirit of the place. Rolling through the green hills of Bukovina we finally made it to Chernivtsi.

5 thoughts on “From Lviv to Chernivtsi”